What is acne and How does acne form?

Why Don’t We Sneeze While We Sleep? 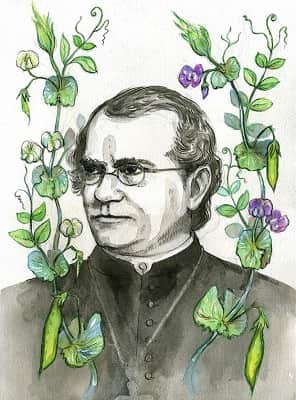 The father of genetics, Gregor Mendel

Gregor Mendel was born in Heinzendorf village of Czechoslovakia, which was then the main source of livelihood agriculture and fruit growing, in 1822.

Gregor Mendel’s father had a genuine commitment to plants, especially fruit trees. He saw them as her children and enjoyed looking after them. Everyone around him was dealing with plants somehow. Gregor Johann Mendel grew up in such an environment. He liked being in the garden with his father and helping him.

The fact that agriculture in the region was very developed and agriculture was also affected by the education curriculum in the region. In elementary school, students were given extensive knowledge in the fields of nature information, fruit growing, gardening, vaccination, and breeding.

This environment in which Mendel lived and the training he received at a young age contributed to the foundation of Mendel’s Laws, which will be the basis of genetic science in the future. Because these environmental effects at an early age left deep traces in Mendel. For this reason, Gregor Mendel had always been interested in living things throughout his life and had been able to look at these assets in a way that no one else has.

Gregor Mendel completed his primary and secondary education in schools in his region. However, due to the loss of his father towards the end of secondary education, he fell to Mendel to cover his school expenses and provide for his family. This required more work than usual.

Mendel became a priest in 1847

Heavy working conditions impaired his health. In fact, the effects of this disease would have increased to a greater extent in the years to come. After suffering the disease, Mendel completed his two-year philosophy education.

In order to continue his life, he had to find a job that would not do him much harm but satisfy himself. With the help of Prof.Dr.Frauz, the Austrian city of Brno (located on the borders of the present-day Czech Republic) is near St. Louis, he entered the Monastery of St.Thomas.

At the age of 21, he entered the monastery as a candidate for the priest and chose himself a new name in accordance with tradition; Gregor. By the time he was 25, he was a pastor.

It was no coincidence that Mendel had chosen the St. Thomas Monastery near the city of Brno. The reason for this choice of Mendel, who had an interest in the Natural Sciences, was that this monastery was famous for its botanical museum, horticulture and extensive libraries.

At that time, apart from their main duties, clergymen working in religious institutions were expected to carry out creative works in one of the fields of art and science. For this reason, Gregor Mendel devoted most of his time to the natural sciences.

Mendel was attending agricultural science classes here. In these lessons, he learned how to fertilize plants with more breeding varieties to increase yield.

His education at the University of Vienna

Mendel started working at the village school as a teacher. He taught Mathematics, Latin and Greek at this school. However, he did not succeed in the exams that must pass for his teaching to be permanent.

The high priest of the monastery then sent him to the University of Vienna in 1851 to study natural history. This university, where he spent four years; provided him with information on his work, which will form the basis of his current genetic science.

Gregor Mendel and his peas

Having completed university education, Gregor Johann Mendel started his studies in the experimental garden of the monastery.

Mendel, who started to work on the rabbits we know with his rapid reproduction, later chose the peas for the lead role of his experiments because the church did not consider it ethical.

He started experimenting on plants with the peas he raised in 1856-1863. In these experiments, he was investigating which features passed to other generations.

Why did Mendel use Pisum Peas?

One of the reasons for choosing Pisum-type peas is that infertile hybrids can be easily distinguished. This feature enabled Mendel to carry out pedigree studies according to their visible features (yellow, green, wrinkled, round, etc.).

Mendel’s observed characteristics in Peas of the Pisum genus

Another reason is that cross-fertilization can be easily done in this type of pea. Thus, Mendel carried out cross-fertilization studies in order to understand what are the features to be transferred to the generations, and developed himself in this direction by using statistical science in these studies.

His development in statistical science will distinguish him from others in the future and will enable him to become a famous meteorologist.

Mendel had spent his last years in a bit of trouble because of the ongoing dispute between him and the new government in Vienna. His kidney ailment, which he suffered in 1883, was exacerbated.

When Gregor Mendel died in January 1884, his underlying studies of genetic science could not attract the attention of the scientific world. The value of his work was understood only 30 years after he died.

Commemorative stamp printed in memory of Mendel by the Vatican in 1984.

Mendel knew very well that his long efforts and time-consuming work would form the basis of the future science of genetics, and he said the following words that would go down in history before he died.

“My scientific studies have afforded me great gratification, and I am convinced that it will not be long before the whole world acknowledges the results of my work.”

The Law of Segregation

Every trait transferred by inheritance is determined by an element (since the gene definition is made after Mendel), that is, by a gene. Genes related to a particular feature can exist in variation forms called alleles. For example, one allele of the hair color gene causes the person to have blonde hair, while another allele causes black hair.

Whose allele is dominant when coming from parents, the child’s feature occurs.

The Law of Segregation

Four Concepts Related To The Law of Segregation

The Law of Independent Assortment

Today, it has been determined that there may be some exceptional cases related to this law. During gene transfer, it was found that genes that are close to each other are more likely to be transferred together.

The Law of Dominance

A dominant feature is a feature whose appearance will always be seen in offspring. In other words, dominance defines the relationship between the two alleles.

If an individual inherits two different alleles from each of its two parents and only one allele phenotype can be seen in the offspring, that allele is said to be dominant.

In order for a recessive trait to emerge, the individual must take two recessive alleles.

Recommended For You – Isaac Asimov’s Three Laws of Robotics

The passion for science

When we examine the lives of science-guiding people, we see that they are interested in science regardless of time and place. We see Gregor Mendel, who is engaged in natural sciences in the monastery, like Albert Einstein, who deals with physics in a patent office.

These examples of life show us that dealing with science is a passion, the thrill of solving a mystery itself.

The fact that Gregor Mendel laid the foundations of the science of genetics when he was a priest, and that Albert Einstein, when he was a civil servant in the patent office, overturned the laws of physics known for Relativity theory, aren’t they good examples for us?

You may fail in some parts of your life, but when you are directed to the right area, you will have unexpected success in your life. And this is a surprise for everyone except those who know you.