Is artificial intelligence really a danger to humanity?

Is Artificial Intelligence (AI) a threat to humanity?

What is Artificial Intelligence (AI)?

First of all, let’s try to make a simple description of Artificial Intelligence which contains extremely deep concepts.

Artificial intelligence is a computer system that can understand and process information through various algorithms, has the ability to learn, can establish relationships between events and make decisions on its own, can make planning and reasoning, can think in part, and can solve problems by learning and using the information they have.

So artificial intelligence; they are systems that think like people, sometimes faster and more intelligent than people.

The History of Artificial Intelligence

What is Turing Test?

Can machines think? or Can Artificial Intelligence think?  This question was asked by Alan Turing in the 1950s. With this question, maybe the foundations of artificial intelligence were laid.

Turing tried to answer the question with a simple test (Turing Test). He proposed that “Turing test is used to determine whether or not computer(machine) can think intelligently like human”?

The person who will ask the questions does not know which of those behind the wall is human and which is the computer. And it starts asking its questions. The purpose of the Turing Test is to determine whether one can understand the software or which is human according to the answers given.

Many experts don’t think that the test is a good measurement tool for artificial intelligence anymore. Some of scientists are even working on developing an updated version of this test.

Nowadays AI fighter pilot defeats the most experienced fighter pilots so this test is not for us but it may be a little simple for AI!

If you want to get to know about Alan Turing, I recommend you to watch The Imitation Game: Enigma. 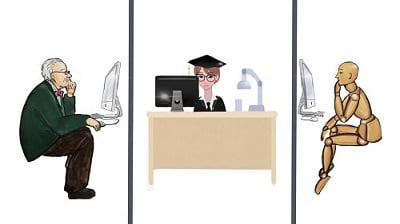 What is Turing Test? | Is the Turing Test a Valid Test of Artificial Intelligence? | AI History

The term of artificial intelligence was first introduced in 1956 at a conference at Dartmouth College in Hanover, New Hampshire. It was then conceptualized by John McCarthy.

The founding fathers of AI | Who invented Artificial Intelligence?

After 1980, with Japan and Britain investing in this technology, AI began to spring again, but 1987-1993 entered a winter period again.

But in 1997, AI began to gain the reputation it deserved again with a situation that attracted everyone’s attention. Deep Blue, a computer developed by IBM, defeated world-renowned chess master Garry Kasparov.

The big tech companies that have experienced that the future of artificial intelligence is really bright have started to devote quite large budgets to this technology.

Of course, these studies are non-secret AI studies carried out for human benefit.

Do you think there are AI investigations conducted in secret that are harmful to humanity?

Facebook has designed chatbots for artificial intelligence research. They were planning these chat robots to learn to negotiate and negotiate by imitating people’s purchases.

They also set the chat language in English. But there was something strange about the speeches of two artificial minds (Alice and Bob) Because of a mistake in design that was thought to be caused by some deficiencies in the English language, these artificial intelligences had begun to develop their own language.

These AI solved this software deficiency by inventing their own language. Facebook shut down its AI the program after realizing the vulnerability of AI.

Alice and Bob had begun to develop their own language. | Artificial Intelligence Chatbots

An example of Microsoft’s artificial intelligence research is a Twitter chat bot called Tay. Microsoft set out to learn about “conversational understanding” by creating a bot designed to have automated discussions with Twitter users, mimicking the language they use. Microsoft has taken Tay offline within 24 hours. What could go wrong?

But Tay, as the bot was named, also seemed to learn some bad behavior on its own. Tay disputed the existence of the Holocaust, referred to women and minorities with unpublishable words and advocated genocide. Several of the tweets were sent after users commanded the bot to repeat their own statements, and the bot dutifully obliged.

Some of Tay’s tweets on twitter | Dangers of AI

Go is an ancient board game which takes simple elements: line and circle, black and white, stone and wood, combines them with simple rules and generates subtleties which have enthralled players for millennia. Go’s appeal does not rest solely on its Asian, metaphysical elegance, but on practical and stimulating features in the design of the game.

AlphaGo defeated world-famous masters Lee Sedol and Ke Jie in the game of Go and became famous for it.

How do you think AI did it? AlphaGo had watched thousands of go competitions and learned the game before he had access to superior Go skills.

Yes, it’s amazing, but the interesting thing is not the part here, actually after that!

In 2017, DeepMind designed a higher version of AlphaGo. AlphaGo Zero.

AlphaGo Zero received nothing from his previous version (Alpha Go) and was given an empty Go board, was taught the rules, and then began his gaming career. Then, by playing Go on his own, he learned to dominate the game with the algorithm of the new system.

While it took months for AlphaGo to professionalize, the fact that AlphaGo Zero advanced enough to beat the original program (Alpha Go) in all 100 games in 72 hours shows how fast AI work is moving in a really short time.

As a result, an AI that defeated the best masters in the Go game was defeated by an artificial intelligence that was smarter than it. AlphaGo Zero did it by not losing any of its matches. Isn’t that creepy?

How is AI used in our daily lives?

Where is artificial intelligence used today?

Siri on smartphones is just one of the artificial intelligence in our pocket. Google’s Now and Microsoft’s Cortana serve as virtual assistants just like Siri.

Siri is an example of artificial intelligence

We can also talk about smart cars, which are expensive technology for the moment but they are slowly making their way into our lives. These smart vehicles produced by Google and Tesla are developing day by day and offer driverless journey. It is not difficult to predict that driving will disappear in the future.

There are also AI algorithms in applications that appear as chat bots. The chat bots that Facebook engineers are working on are capable of responding to users 24/7. Although these AI, which provide appropriate answers to the questions, do not work very efficiently at the moment, they can unfortunately take away their customer service representative employees from their jobs in the future!

How does AI translate it? This AI improves itself by reading the texts written by billions of people around the world, learning and trying to improve their translations by using current data on the communication of different languages with each other.

AI used for translation is so advanced that Google engineers admit that they have lost control over how AI works because artificial intelligence began to translate cross-language translations that had never been taught to them a year ago.

Is artificial intelligence really a danger to humanity?

Is AI a threat to humanity?

Unfortunately, I cannot answer “no” to these questions. If you read my article patiently until you get to this section, the examples I gave above might scare you a little. Because we can see how beautiful things happen when the humanity that created AI uses it for good purposes. But can’t an AI that malicious people can create really be a threat to us?

After all, Swedish chemist and engineer Alfred Nobel, invented dynamite for human benefit, but now it seems that dynamite has become one of the indispensable destroyers of the war industry. So if AI technology is used in the war industry, what will happen to us in the future?

On July 29, 2015, signed by nearly 1,000 scientists who were worried about the answer to this question, the joint letter “Stop Killer Robots” was read at the International Artificial Intelligence Conference in Buenos Aires, Argentina. So do you think that anyone heed this letter? I don’t think so, but we’ll still learn the consequences in the future.

AI is focused on achieving given / learned commands. They do not give place to sensuality, they never give up and complete the task.

Do you remember when test engineers tried to block them to see if they would continue doing the tasks assigned to the Boston Dynamics robots? The robots, who were pushed and rubbed and rolled on the floor, stood up and resumed their duties as if there was nothing. Because they don’t excuse anything that prevents them from completing the mission, they are focused on the mission, their only goal is to complete the mission successfully. They’ve already eliminated most people with these features!

The Boston Dynamics Engineer Is Testing How Faithful The Atlas Robot Is To The Given Task.

In this case I think it is possible that after a while, human beings cannot keep these artificial intelligence conscious or unconscious under control. Although they are all digital/virtual assets, they learn more quickly than we do and are able to make more rational decisions.

Isn’t that reason enough for us to be afraid of artificial intelligence?

If you are looking for a clearer answer to the question of whether artificial intelligence is dangerous to humanity, we can suggest a movie for you.

Transcendence is a 2014 American science fiction thriller film directed by Wally Pfister in his directorial debut, and written by Jack Paglen.  The film stars Johnny Depp, Morgan Freeman, Rebecca Hall. The film Transcendence is about artificial intelligence and how AI can dominate people, and when you watch it, you will become really afraid of the development of AI technology.

AI algorithms and robots must necessarily be designed to comply “Three laws of robotics” of Isaac Asimov. Who knows, some governments have already begun to legislate it.

*  “I believe that at the end of the century the use of words and general educated opinion will have altered so much that one will be able to speak of machines thinking without expecting to be contradicted.”  Alan Turing

*  “Everything that civilisation has to offer is a product of human intelligence; we cannot predict what we might achieve when this intelligence is magnified by the tools that AI may provide, but the eradication of war, disease, and poverty would be high on anyone’s list. Success in creating AI would be the biggest event in human history. Unfortunately, it might also be the last.”  Stephen Hawking

*  “One of our big goals in search is to make search that really understands exactly what you want, understands everything in the world. As computer scientists, we call that artificial intelligence.” Larry Page

*  “I am in the camp that is concerned about artificial intelligence.  First the machines will do a lot of jobs for us and not be super intelligent.  That should be positive if we manage it well.  A few decades after that though the intelligence is strong enough to be a concern.  I agree with Elon Musk and some others on this and don’t understand why some people are not concerned.” Bill Gates

*  “We need to be super careful with AI. Potentially more dangerous than nukes.” Elon Musk

*  “The thing that’s going to make AI so powerful is its ability to learn, and the way AI learns is to look at human culture.”  Dan Brown

Please write your comments, suggestions and questions in to the comments section about this article.