What is acne and How does acne form?

Nowadays, humanity which celebrated the 50th anniversary of its footsteps on the Moon has turned its eyes to Mars. The planet Mars is one of the brightest objects in the night sky, easily visible to the eye at times as a bright red star. How long does it take to get to Mars? How many days can we get to this mysterious, red planet? How many days did the spacecraft get to Mars? What are the spacecraft sent to Mars? Now, we will look for answers to these questions.

How long does it take to get to Mars?

How Many Days Can We Reach Mars?

Space travel is becoming more complex day by day because the solar system is constantly changing and each planet has its own orbital mechanics.

Since Earth and Mars have elliptical orbits, the distance between them is highly variable and the planets must be precisely aligned to send a spacecraft to Mars.

Mars and Earth’s orbits are elliptical. | How Long Does It Take To Get Mars?

Every 26 months, Mars and Earth are at the closest distance, which is about 57 million kilometers away.

During this time, if an unmanned spacecraft leaves the Earth, traveling at a speed of 58,000 km/h, it will take more than 40 days to reach the Red Planet.

A journey at this speed will only be possible if the spacecraft follows a direct path without being disturbed by the wrath of the solar system and the weight of living resources. Unfortunately, space travel is much more complicated than a straight line, as we thought.

Nowadays Hohmann Transfer Orbit is considered the most efficient way to reach Mars. Space travel is estimated to last roughly 260 days or eight to nine months with a manned spacecraft that is still powered by chemical propulsion.

That’s why NASA and the other companies are looking for a way to reach Mars more efficiently. Finding this means paving the way for mankind to build colonies on Mars and to fly more frequently.

However, even if we develop a faster way to reach Mars, it is estimated that the roundtrip will still last for several months. This means that we need to solve human health and resource needs in extended deep space missions.

Clearly, time is just one of the obstacles that stand in front of our Mars dreams. Still, NASA says it plans to send people to Mars in the 2030s.

How Long Did It Take The Spacecraft To Get To Mars?

Sojourner, the size of a large toy truck, is the first traveling vehicle sent to Mars.

Opportunity spacecraft descending to the surface of Mars in 2004.

Opportunity contributed a great deal to NASA’s Mars work, staying for more than 5000 days (sol) on Mars, despite being sent for a 90-day (sol) mission.

Opportunity paved the way for NASA’s subsequent surface exploration missions, such as Curiosity landing on Mars in 2012 and InSight, the seismic survey vehicle downloaded in 2018.

Opportunity continued exploration on the Red Planet for 14 years, 4 months and 16 days, until it was disconnected from the Earth on June 10, 2018.

It photographed Mars more than 225,000. You can reach the photo gallery here.

Spirit landed on Mars three weeks before her twin Opportunity.

Two reconnaissance vehicles landed on two different parts of Mars and were tasked to detect the presence of water in the Red Planet’s past.

Spirit, like Opportunity, was planned to work on the surface of Mars for only 90 days (sol). Spirit continued to work on Mars until 2009 and contributed greatly to Mars research.

The famous robot Curiosity took a lot of pictures of Mars and was sent to Mars with the Mars Science Laboratory.

A photo of the planet Mars taken by Curiosity. 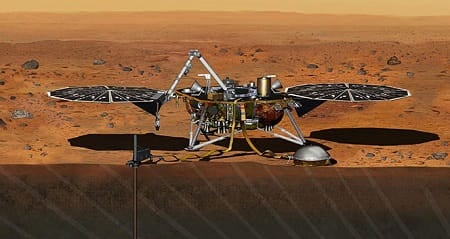